A Safe and Happy Howliday! 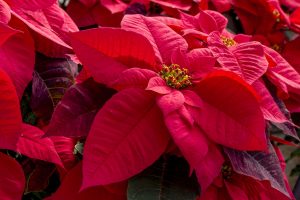 There are few symbols of the upcoming Holidays as significant as mistletoe, Poinsettia, or the magnificent pine tree embellished with the trappings of the season. Most of us who celebrate the holidays keep at least one or two of these plants on display throughout the observance. If you are up on your folk lore, wives tales, and Google searches you will notice there is a lot of conflicting information regarding the safety of embracing these symbols while sharing your home with pets. We hope this blog helps you decide where concern is valid without preventing you from enjoying the holiday!

Mistletoe has represented love, fertility, and peace since the time of the ancient Druids. It became associated with the celebration of Christmas in England in the 18th century and has been a staple excuse for stealing a kiss from a loved one ever since. There are multiple species of mistletoe with two, the American and European mistletoe, considered as toxic to pets. Mistletoe berries contain polysaccharides, alkaloids, and lectins. Mild signs of gastrointestinal irritation such as drooling, vomiting or diarrhea may occur if small amounts of the plant are ingested. Ingestion of large amounts of berries are likely to cause more severe issues including low blood pressure, difficultly walking, seizures and death. As such, it is paramount to keep these plants out of reach of curious pets.

Poinsettias, the most recognizable of all Christmas flowers, were brought to the US from Mexico in 1828 by Joel Roberts Poinsett, whom the flowers were later named after. Concerns about the safety of displaying poinsettias in the home have been overwrought. It is not a particularly toxic plant, and a small child would need to consume some 500 leaves before experiencing GI disturbance. Pets may be somewhat more sensitive, and could potentially experience mild vomiting and diarrhea after ingesting the bitter leaves. Also, some species of poinsettia exude a sap that can be mildly irritating to the skin. For these reasons, using reasonable caution with pets, and preventing them from ingesting the plants is certainly recommended.

Many homeowners prefer to bring live evergreen trees and boughs into their homes as they decorate for the holiday season. Although not excessively toxic, chewing on and ingesting pine needles will prove irritating to cats and dogs. Sharp needles could, in theory, cause physical damage to intestines. Dogs and cats who show an interest in chewing these pine needles should not be allowed to continue to do so. Of more concern than ingesting needles is the silly puppy who bites glass ornaments, lights, or wires, the family cat who drinks aspirin water from the tree base, or the kitten who eats tinsel. Aspirin poisoning, intestinal obstruction and damage from chewed electrical cords are serious medical concerns for your pets.

Last but not least, members of the Lilium or Hemerocallis family (Easter lilies, tiger lilies, day lilies, Asiatic lilies etc) cause acute renal failure in cats. Exposures as small as simply getting pollen on their head could cause severe poisoning. Affected cats initially vomit and become lethargic. They later seem to recover from the ailments; however, the disease soon progresses to kidney failure that may not be curable. Early treatment is essential, and any exposure should be considered an emergency. Use an abundance of caution, and politely decline gifts of lilies if you share your home with a cat.

We hope each of you keeps your holidays merry, safe and bright! From our Longwood Family to yours, happy holidays!